A GUIDE TO ALPINE TOURING

WHAT GOES UP MUST COME DOWN: A GUIDE TO ALPINE TOURING 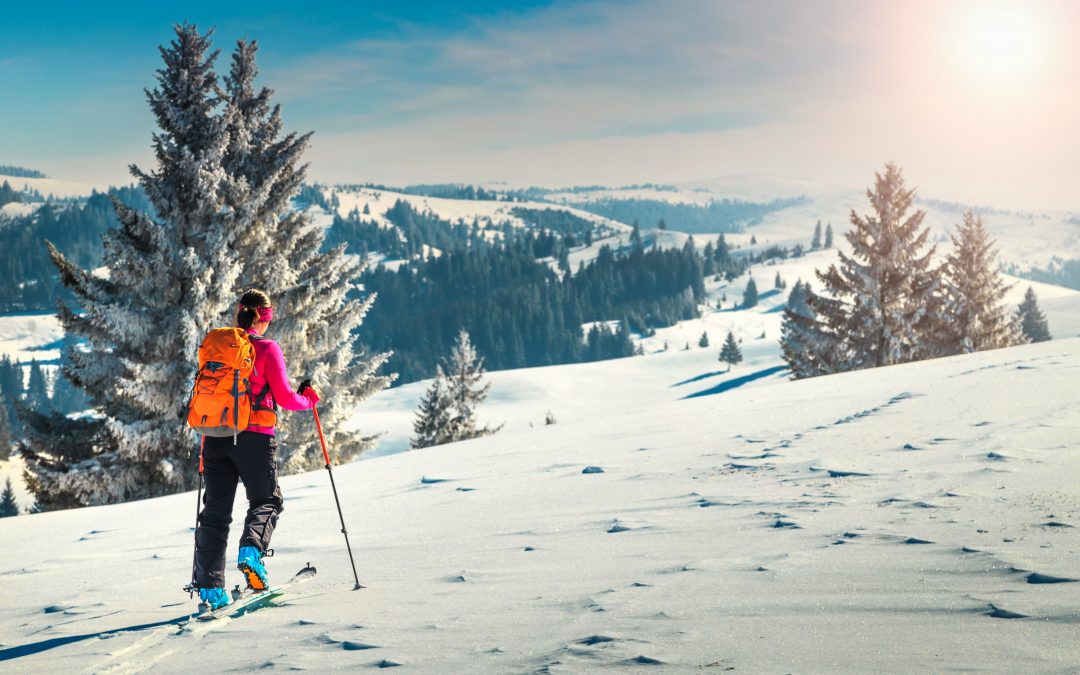 It seems like just as many people are walking up the mountain as skiing down it these days. You might be wondering why anyone would want to walk up the mountain when there’s a perfectly good chairlift, but for most uphillers, it boils down to one thing: exercise. Alpine Touring, also referred to as uphilling, skinning, and skimo, is a great workout and changes the way you spend time on the snow. It can turn a day skiing at the resort into a totally different experience, one that many find more rewarding. Using your own strength to go up somehow makes skiing down that much sweeter, and the freedom to get uphill before the lifts start spinning or going into the backcountry means having the best conditions all to yourself.

What differentiates AT gear from regular alpine ski gear is the ability to walk uphill and also to ski down the exact same way you would on regular alpine skis, with your heel locked in. AT gear is designed to have both a “walk mode” and a “ski mode.” The bindings have a mechanism that allows you to release the heel for walking uphill and also a way to secure the heel for downhill skiing (this is where AT differs from telemark skiing, when the heel is released for both uphill and downhill mode). Alpine Touring boots are like a regular ski boot but lighter, with a “walk” mode for flexion going uphill. Finally, you’ll need skins, a tacky, carpet-like material adhesive that sticks to the bottom of your skis to keep you from slipping backward when you’re climbing uphill. When you’re ready to ski down, you simply remove the skins and readjust your bindings and boots from walk mode into ski mode. (A backpack is also necessary to carry your skins on the ski down, as well as water for skinning up, and extra layers since you get hot and sweaty on the way up, and warmer layers for the way down.) 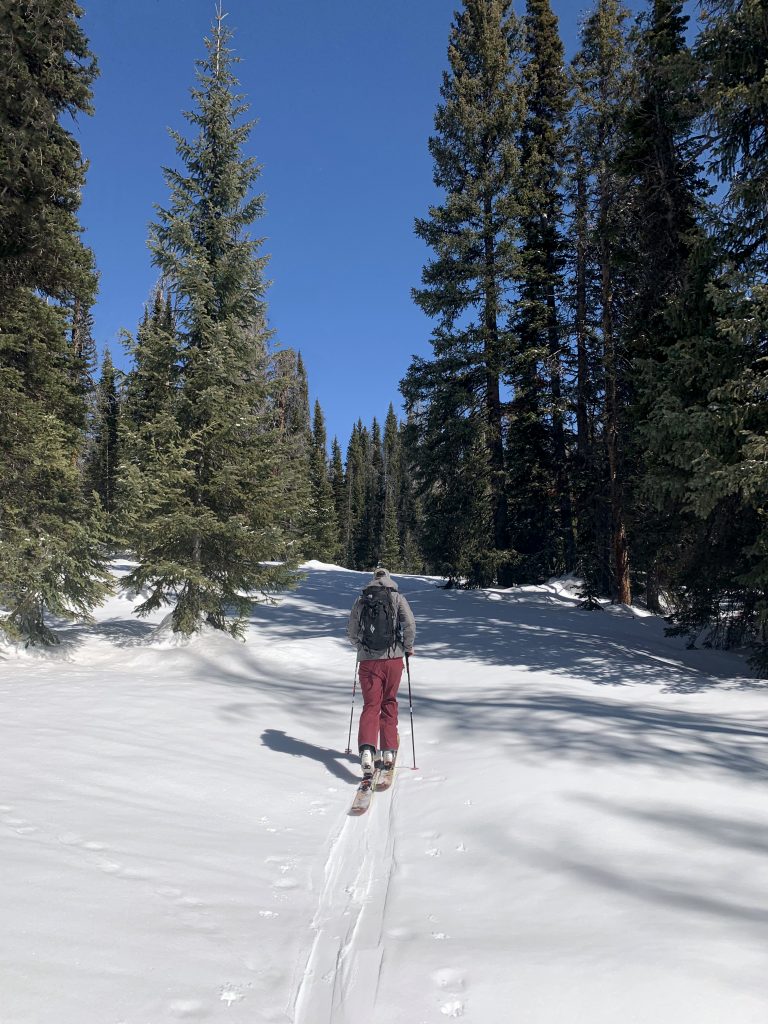 That might sound complicated, but make no mistake: AT is the fastest growing category in the outdoor sports market. The growth in sales of alpine touring gear soared from about $35 million in 2016/17 to more than $64 million in 2018/19, according to Backcountrymagazine.com.

While Alpine Touring equipment was originally designed for backcountry skiing, it’s becoming increasingly popular in-bounds, too, especially among Steamboat’s fitness-crazed. And with so much uncertainty about how and if ski resorts are going to be able to operate safely amid the pandemic this season, AT is a way to be able to enjoy skiing this winter whether the lifts are running or not. There’s even a new resort, Bluebird Backcountry, with 1,200 acres about 30 minutes south of Steamboat near Rabbit Ears Pass that’s been developed for AT skiers only.

“Because of the pandemic AT is going to be huge this season,” says Andrew Stoller, Manager/Buyer at Ski Haus. “We started selling our winter gear at the beginning of October, and 90 percent of those setups are going to be AT. This summer, all our trailheads were so packed, it’s probably going to be the same thing in the winter.”

We caught up with Stoller to get the lowdown on what’s new in AT equipment for this season and what you need to know if you want to earn your turns this winter. //skihaussteamboat.com

If the boot fits, walk uphill.When it comes to AT equipment in general, there’s been a real shift back to the versatility of a one-thing-does-it-all hybrid category, and that’s also true of boots. “We’re seeing boots that are getting way better for hiking but are still boots you can ski in all day in the resort,” Stoller says. This is a more sensible alternative to the ultra-lightweight AT boot that might perform well for ease of going up but did not offer enough support to really enjoy skiing down. These newer hybrid models offer a walk mode with a decent range of motion. They look more like traditional alpine ski boots with four buckles, a more substantial cuff height for more support, and GripWalk soles that are reasonable for walking but safer for skiing.

“These hybrid models are especially nice for someone who has never done it before. Even if they never end up going uphill, they still have a boot that’s going to ski well.” Finally, most AT boots are totally customizable, with heat moldable liners and shells. “You can customize them right out of the store. You no longer have to spend a lot of money to have them fitted properly.” 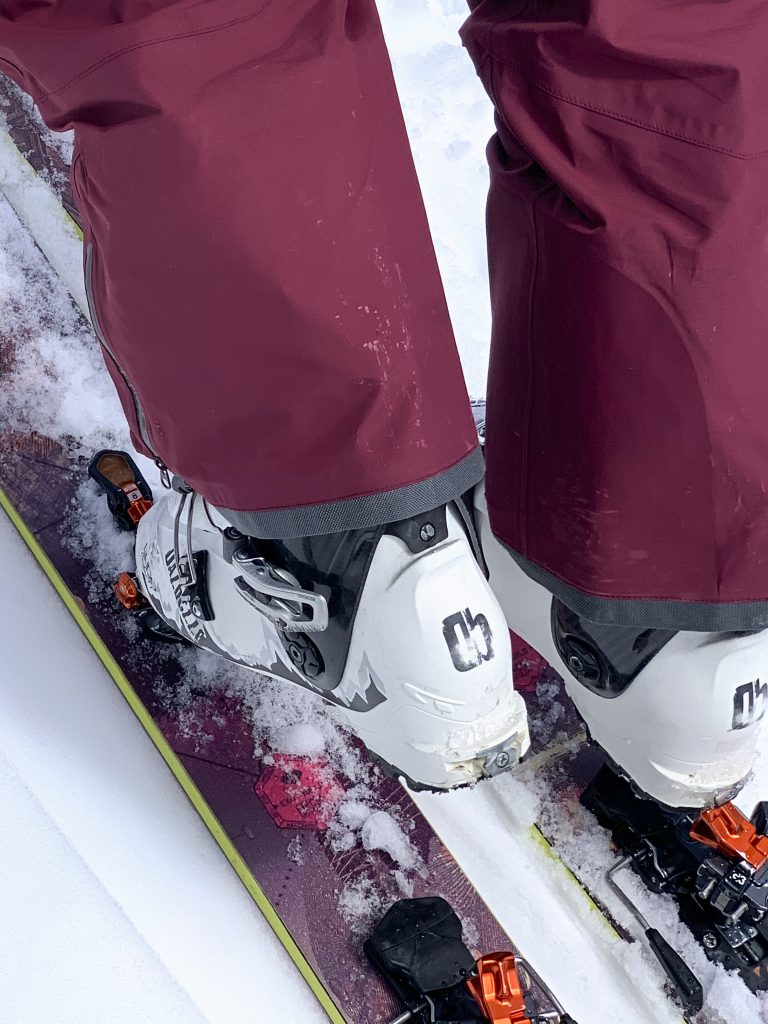 A binding that goes both ways.The hybrid trend also goes for bindings, Stoller says, with popular models like the Salomon Shift flying off the shelves. “The idea is to build a binding that functions with the same release as a regular alpine binding in ski mode, with enough travel to act as a shock absorber that moves back and forth as you ski down,” Stoller says. Traditional AT bindings use pins that insert into each side of the toe piece of an AT-specific boot, which are very rigid and don’t release as easily. “You can definitely feel a difference. Pins are much less responsive and harder on your body, especially in unforgiving terrain like bumps.” Shift bindings don’t require an AT compatible boot, so it’s a great option for someone who wants to try AT but will still have a decent binding, whether they decide to go uphill or not. 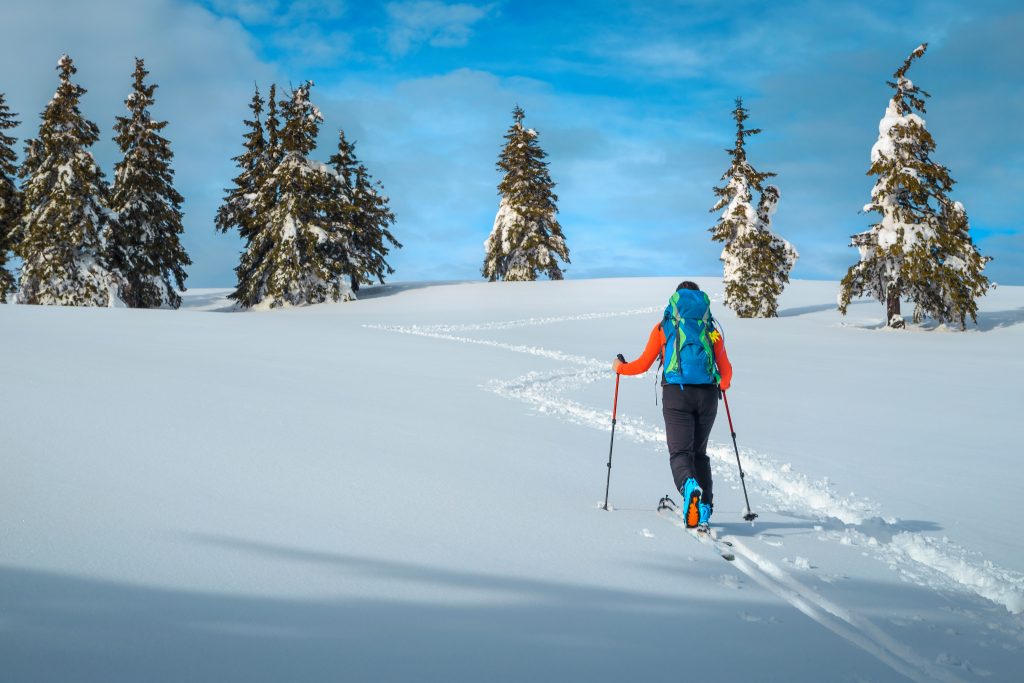 One ski for all.There are skis that are specifically designed for touring the backcountry, but it’s not necessary and can be the wrong choice for people who mostly like to ski in-bounds at the resort. “Backcountry specific skis are lighter and designed to hold skins, but you can use any ski for an AT setup,” Stoller says. “In fact, if you do go with a super lightweight ski, you’re going to sacrifice a little bit on the way down in terms of stability.” On the other hand, a heavier ski can be a detriment for going up since it makes it harder, and therefore less enjoyable. That’s why skis like the Freebird series from Black Crows are super popular as a hybrid option. “All their models come in a lighter backcountry version. They are a bit lighter, but they still ski really well.” 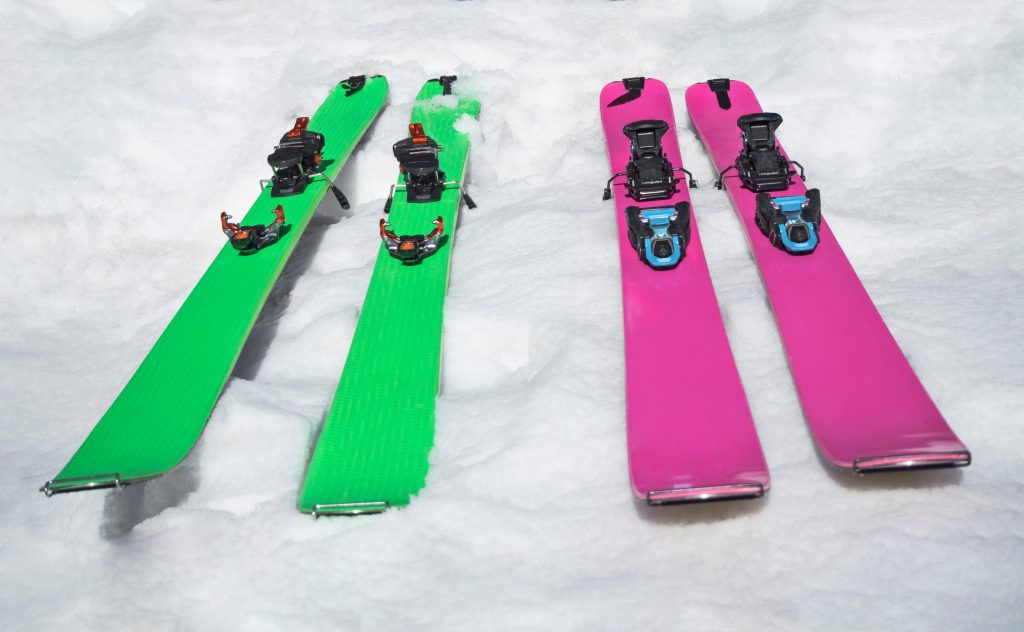 Give me some skin.If you’re new to the AT world, skins are something you’ve probably never had to think about before. Basically, skins vary based on material (synthetic, mohair, or a blend between the two) and how much traction and grip they have. “Synthetic skins are the least expensive, the most durable, and give you the best grip,” Stoller says. “Hybrid skins give you the best grip and are a little bit lighter, so that’s what most people are getting. Ideally, you want some grip, but for people who are mostly climbing up in the ski resort and want more traction, synthetic skins work just fine. If it’s icy, you want all the traction you can get.” 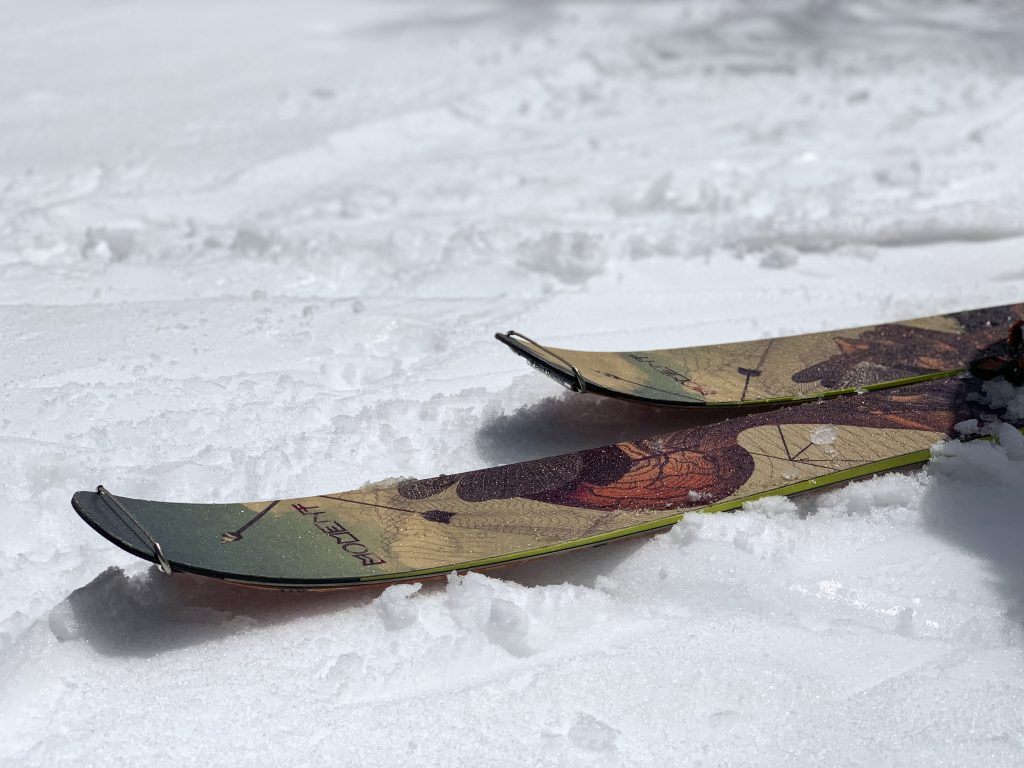 For information on AT rentals and demo equipment, call Ski Haus (970) 879-0385, www.skihaussteamboat.com

For more information on real estate or Steamboat Springs in general please don't hesitate to call or email me at 970.819.5581 or sarah.peterson@steamboatsir.com